Our 2019 Winner: AL Lynch is a third generation Californian, and granddaughter of a California commercial ocean fisherman.  April Louise has spent many fine days fishing; her favorite sport being the excitement of catching salmon of the Pacific Coast which has inspired this watercolor seascape.

The artist, who lives near Bloomfield,  states that she has good observation skills, a reasonable sense of color, and a love of art.  Painting as a hobbyist, she has recently joined AWS, Art Workshop of Western Sonoma County, a group of local fine artists who meet in Sebastopol.  She enjoys frequent visits to the local attractions, restaurants, and beautiful scenery of Bodega Bay, accompanied by a black standard poodle named Pearl. 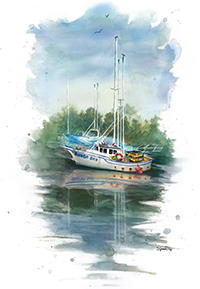 Our 2018 winner: Sarah K. Good received her B.A. in Commercial Art with a minor in Advertising as well as her Masters in Fine Art and Illustration under Brian Jekel at Pensacola Christian College. Currently, she uses that training by working as a freelance artist in Occidental, California.

She has received awards in various contests including first place for the Pensacola Christian College Commencement Art Contest in the color category, “Best of Show” from the Quayside Gallery, and “Best Artist Award” at the 2017 Christian Film Festival for illustrations in Unbridled. She attributes every successful inspiration, composition, and brush-stroke to heartfelt prayer.

Sarah’s works are mainly comprised of illustrations, portraits, and still lives. No matter what she is painting, her detail-oriented works give positive messages of love, faith, and truth. It is her desire to inspire others or give them something meaningful to think about.

Our 2017 and 2016 artist is Julianne Sooley. She resides in Santa Rosa, and is a regular visitor to Bodega Bay and  makes it the first stop for all house guests: a hike on Bodega Head and a sampling of seafood are a given on the agenda!

Julianne  is pursuing her passion for art after a varied career as mom, computer programmer, and floral designer. Her watercolors and commissioned works have been displayed in juried shows at the Sebastopol Center for the Arts and the Watercolor Society of Sonoma; by invitation at the Art Guild of Sonoma gallery, and on display at the 2015 Harvest Wine Festival (first place award).
Her paintings, collages, and pyrography (on wooden bowls) artworks are held in private collections throughout the U.S. Julianne’s website is http://www.julieswatercolors.com.

Our 2015 winner, John Hershey, a full-time resident of Bodega Bay. John holds a B.A. in Advertising Design from Syracuse University, and was the producer and creative director of Hershey Multimedia, Inc. in San Francisco for 27 years. He has exhibited at the Bodega Bay Local Color Gallery and the Mind’s Eye in NYC. His current work of coastal photographic notecards can be seen locally in Sonoma County shops, cafes, and bookstores as well as at the Fisherman’s Festival, Art Walk, and Farmer’s Market. Recently reconnecting with his painting roots, John applies his photographic eye and design skills to the fluid medium of watercolor. See more of John’s work at http://www.jhersheyphoto.com.

Our 2014 winner, Jean Warren, resides in Bodega Bay, holds a B.A. in Art Education and has taught art at the elementary and adult levels. Her work is included in the public and corporate collections of the Triton Museum, City of Walnut Creek, City of Suisun, Coldwell Banker, Kaiser, Chevron, Pfizer, among others and in private collections in the U.S. and abroad. Jean’s work can be seen at the Bodega Bay Heritage Gallery, 1785 Coast Hwy One, Bodega Bay, CA. Gallery website at www.bodegabayheritagegallery.com.

Our 2013 winner Jackie Heronimus is a watercolor artist currently residing in Bodega Bay and has spent over 30 years in the San Francisco Bay area. She also owns a home along the foothills of the Rockies in Colorado. Jackie hopes to draw her audience toward an awareness of the precious and fragile beauty of our coastline in order to ensure its preservation for future generations. Jackie has shown her work in galleries in San Francisco and Vancouver, Canada. Her watercolors are enjoyed in private collections across the United States and Canada. Some of her work from the deep blue sea can be viewed currently on her Facebook page.

Kai has shown at numerous galleries in Los Angeles, New York, San Francisco, England and France. His work is composed of figures, landscapes and objects focusing in on the moments we keep to ourselves. Utilizing expressive realism, the images are cerebral and visceral, creating a mood of melancholy and solitude with an appreciation for their necessity and beauty.